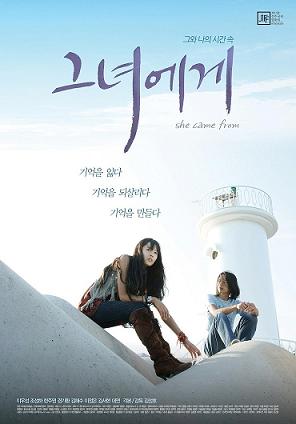 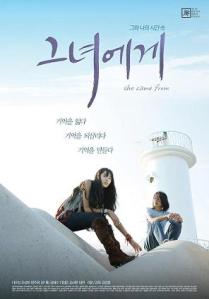 A contemplative, enigmatic arthouse drama with a bit of road movie tossed in, Kim Seong-ho’s ambitious sophomore feature film – about a young director confronting loss and abandonment – benefits from a great choice of locales, fine lensing, and the natural performance of a fresh newcomer, but lapses into excessive melodrama in the final reel. If a little ambiguity isn’t your thing, proceed with caution.

For better or worse, on the festival circuit at any rate, films dealing one way or another with the movie business – for the most part, decidedly joyless, self-indulgent excercises, not infrequently involving temperamental actors or directors confronted with ethical dilemmas or rocky relationships – don’t seem to be on the decline. The opener at the 11th Jeonju International Film Festival, Park Jinoh’s “Should’ve Kissed” (2010), about two aspiring actors in New York, is representative of the many brooding, analytical works dwelling on the hardships of the struggling artist in the film world. Kim’s film, on the other hand, rather than wallowing in angst, succeeds in communicating the sheer joy of the creative process, and in exploring the limitless possibilities of the medium, fashioning a dreamlike tableau of shifting realities and moods.

The first scene takes place in a police station, where In-soo (Lee Woo-seong) is filing a missing persons report for a woman about whom he knows precious little – neither her address, her age, nor even her name. Flash back, and we learn that he has come to Busan to cast an actress for a film he’s currently writing, when he runs into a woman with waist-length hair, wearing a fringed vest, and knee-high boots and looking as though she stepped right out of a 1960s issue of Vogue magazine. What’s more, she’s riding a motorbike. A singular bond forms between the awkward, soft-spoken In-soo and the rebellious young woman, not especially of the romantic variety, but united in a shared sense of grief – as the two set about on what appears to be a search to retrieve the missing pieces of their past lives. Things take an unexpected turn later on, when it becomes apparent that the troubled man has been trying to create a fictitious past for the woman.

Meanwhile, Dong-in (Jo Seong-ho, “The Executioner” 2009), a photographer rapidly losing his eyesight, is desperately looking for the daughter he abandoned 20 years before. It must be conceded that, for ratcheting up the drama, a disability trumps a terminal illness, and in any case, either is preferable to identical twins separated at birth (a perenial favorite of Korean TV dramas). In one baffling scene that strains credibility, Dong-in, now nearly blind and briefly reunited with his daughter, is taking her picture, unaware that she has burst out of the room in a fit of anger.

“She Came From” shares some themes in common with the director’s previous effort, “Penny Lover” (included in the fine omnibus “Short! Short! Short!” (2009), commissioned by the Jeonju festival), in which a nightclub singer attempts to get on with her life after breaking up with her boyfriend. Both films deal with abandonment; both attach importance to the evocative power of personal artifacts; and both are told through numerous flashbacks. Significantly, neither reveal the details surrounding the separation, choosing instead to focus on the process of recovery. But nothing in Kim’s modest short film prepares us for the more intricate structure, the irreproachable camerwork and the nuanced performance of his lead actor as an unconventional protagonist, so different from the macho males so often encountered in Korean cinema. And even in a field where technical accomplishment is all but taken for granted, Kim’s film stands apart with it’s subdued palette and finely judged compositions, several of which could stand alone as works of art.

Without a budget for elaborate lighting and costly sets, the director, along with cinematographer Kim Hyeong-joo, scouted for unique locations – in and around Busan’s Gwangalii beach, Jagalchi market, Jungang station and Nampo-dong – and, filming at dawn and dusk, wrapped up shooting in under two weeks. If the various strands of the story don’t quite coalesce into a satisfying whole, and if some of the more intense moments aren’t convincingly portrayed, there is still much pleasure to be had in the fine visuals. Korea’s second most populous city may not be Tokyo or Paris, but seldom have Busan’s beachfronts, natural wilderness and other scenic spots looked this good on film.

Reviewed at the 11th Jeonju International Film Festival on May 2, 2010