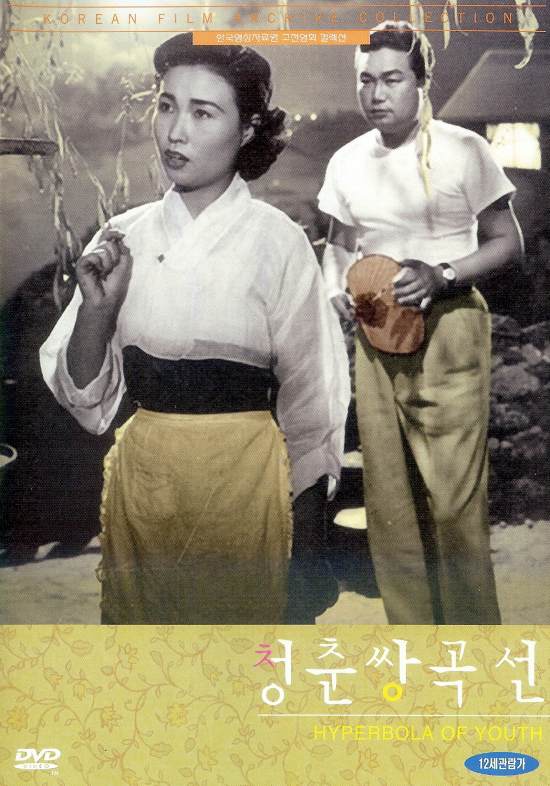 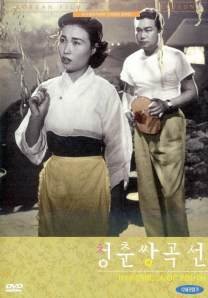 Hyperbola of Youth (1956), Han Hyung-mo’s satirical musical comedy, tells the story of two friends, one rich, the other poor, both suffering from digestive disorders, who agree to exchange lifestyles for two weeks on the advice of their physician. Each of them falls in love with the other’s younger sister and by the end of the tale, the two love-struck couples end up having a double wedding. The fourth work in the Korean Film Archive Collection to feature Han (he is director of photography on Choi In-kyu’s Hurrah! Freedom), Hyperbola of Youth will be of interest to specialists, collectors wishing to broaden their knowledge of Korean cinema and to those (myself included) with an unbounded admiration for the work of Han Hyung-mo.

One doesn’t usually associate Korean film with musical comedy and Hyperbola of Youth isn’t about to radically alter that perception. Viewers anticipating a Hollywood-style musical with colorful sets and dazzling choreography will be sorely disappointed — the film has few musical numbers and no song and dance routines; the sets are barebones and the camerawork is anything but flashy. The film might more accurately be described as a comedy with a couple of songs thrown in for entertainment value. To those familiar with the powerful dramas Madame Freedom and The Hand of Fate, the breeziness of Han’s film, with its slapstick humor and transparent plot, may come as a somewhat of a shock. The work does however have a certain undeniable charm.

The film’s music was written by Park Shi-chun, who composed the enlivening score for Han’s anti-communist thriller The Hand of Fate. The first musical number occurs just minutes after the opening credits, as Doctor Kim (Park Shi-chun) is about to leave for the beach with his friend. One of the nurses asks the doctor if he hasn’t forgotten his promise, whereupon he picks up a banjo as the three nurses (the Kim sisters) begin singing, “We’re delightful angels in white…” Curiously, they sing the first refrain in Korean, then once again in English. Bu-nam (Yang Hun), the son of a wealthy businessman, walks in complaining of stomach pains and after a brief examination is told he eats too well and the doctor prescribes an enema. While Bu-nam is being treated in the next room, Myung-ho (Hwang-hae), an impoverished middle school teacher, enters complaining of similar symptoms. He is told he is suffering from malnutrition. When Bu-nam returns, the two former college classmates exchange greetings, after which the good doctor proposes a most unorthodox treatment. Saying that “Some diseases cannot be cured by medicine alone,” he suggests the friends swap lifestyles for two weeks, which they reluctantly consent to do.

As Myung-ho and Bu-nam set off together to spend a fortnight away from their families, we learn that Myung-ho’s father had been kidnapped and taken to North Korea, that his brother was killed in action and that Myung-ho was wounded in battle. Barely eking out an existence, he lives with his mother and sister in a shack behind a broadcasting company. When asked where he lives, Bu-nam answers, “Just look for the biggest house.” The pair resembles a vaudevillian Skinny and Fatty team: Bu-nam is the awkward but big-hearted oaf, while Myung-ho is articulate and self-assured. As Bu-nam huffs and puffs his way up the steep passageway that leads to Myung-ho’s shanty, he brushes up against a street peddler (Kim Hee-gap) who has just been entertaining Myung-ho’s sister Jung-ok (Ji Hak-ja) with a medley of popular song. When Bu-nam, panting and out of breath, finally reaches the shanty, his initial reaction is to turn back. On the other side of town, Myung-ho is nearly struck by a car driven by the fiancé of Bu-nam’s sister Mi-ja (Lee Bin-hwa). Mistaken for a door-to-door salesman, he is told to go away. Myung-ho is also ready to call it quits, but is persuaded to remain.

And so the rehabilitation of our two heroes begins, the one experiencing privation, the other overabundance. Bu-nam has to chop wood during the day, sit on a hard floor eating watery barley porridge at dinnertime and sleep under a leaky roof at night. Never having wanted for anything, Bu-nam questions all this frugality. In one scene, Bu-nam watches Jung-ok as she mends a pair of old socks:

Bu-nam: How can you wear those? They’re like rags.
Jung-ok: I can wear them for another 15 days.
Bu-nam: All the sock sellers will go out of business.
Jung-ok: Imagine how many resources would be saved if everyone in this country wore their socks for 15 more days. It’s a problem that Koreans pretend to have a lot when they actually don’t.

This might very well have struck a chord with audiences in Korea, at the time one of the neediest nations on earth. Meanwhile, Myung-ho grows increasingly restless as he spends his days reading the newspaper, drinking expensive liquors and eating lavish meals. At one point, he says to Mi-ja, “Your house is like a restaurant, coffee shop and a dance hall, all in one.” Myung-ho is not taken in by what passes for luxury in post-war Korea and never misses an opportunity to criticize Mi-ja’s idleness. In spite of their differences, the two couples gradually fall in love. Since Mi-ja’s father has already arranged her marriage to a wealthy dandy, the housekeeper hatches up a scheme to get him to consent to her betrothal to Myung-ho.

It is tempting to analyze Han’s caricature of the lives of the well-to-do and the poor. Myung-ho’s family is forever occupied with household chores, mending clothes and chopping wood, while Bu-nam’s family enjoys going to the beach, watching movies and indulging in the latest in Western clothes, fashion and music. The poor have sacrificed more as a result of the war, they are harder working and less wasteful of the country’s limited resources. The rich are vain and materialistic. If the director is not unsparing of Western culture, neither is he uncritical of traditional Confucian patriarchal society. While it would be foolhardy to read too much into the film, a glance at the director’s background might help to clarify Han’s philosophy.

Han learned his trade at the Toho Film Studio in Tokyo and returned to Seoul in 1943, where he was the director of photography on the Japanese policy film Children of the Sun (1946). After Liberation, he was the cinematographer on Choi In-kyu’s Hurrah! For Freedom (1949). His debut as director was Breaking the Wall (1949), which told the story of brothers divided by ideology. After the outbreak of the Korean War, Han served as a war correspondent, making propaganda films. His debut following the war was The Hand of Fate (1954), notable for its incorporation of mainstream culture and mapping the inroads of Western influence. This was followed up by Hyperbola of Youth (1956) and Madame Freedom (1956). Han continued to make films until the late 1970s.

Han’s films owe their success to a combination of fortuitous circumstances and personal resourcefulness. The industry benefited from tax exemptions for domestically produced films instated in 1954 and the public’s insatiable appetite for entertainment after the war. Han seized the initiative to adapt a controversial serialized novel to make Madame Freedom, which bears the distinction of being the first Korean film to use proper cranes and dollies. With each successive film, Han ventured into fresh territory, attempting various genres and subject matter: historical films, mysteries, dramas, comedies and romances; and embracing a wide range of themes: the 38th parallel, Western culture, sexual liberation and homosexuality. From 1954 to 1960, the number of domestic releases grew from 34 to 100. In part attributable to new tax laws favoring filmmakers, this soaring rise in production was also due to the interest aroused by the high quality of films by directors like Han.

Han stands alone in the pantheon of Korean film just as Godard and Truffaut do in the history of French cinema. While influential, Han’s films did not spawn a Korean New Wave. Han was not openly reacting against the studio system or revolting against an older established generation of filmmakers. His films, self-produced, were mainstream commercial ventures. At the same time, he struggled with conflicting impulses – on the one hand, to earn enough money to make more films, and on the other, to remain true to his artistic impulses and social outlook. Like his Japanese contemporary Masumura, Han is yet another Asian director active in the fifties and sixties whose work is strikingly individual but which has been unjustly neglected on the festival circuit and by video distributors. Both are known by only a handful of films which only hint at the tremendous talent behind them. While lacking Masumura’s themes of violence and sexual obsession, Han’s films share with Masumura’s a profoundly humanistic outlook and a thoroughly contemporary viewpoint. Both directors produced damning critiques of the dehumanization of war, were critical of mindless consumerism, and ushered in an era of strong-willed, independent women. Recently, a group of directors, writers and producers led by Park Chan-wook, troubled by the current state of Korean cinema, have organized a festival to raise public awareness of older movies. Park says that watching old films helps produce new ones, and they are often more fun and refreshing to watch. Bong Joon-ho and Im Sang-soo, two engaged directors whose works are continually challenging, are to some extent today’s successors to Han Hyung-mo’s legacy.

The DVD, released under the auspices of the Korean Film Archive (KOFA), is encoded region 0 and is provided with English subtitles on the feature as well as the bonus materials. The transfer has numerous instances of dirt and scratches. A bilingual booklet is included, containing photos, essays, biographical information and a synopsis of the film.