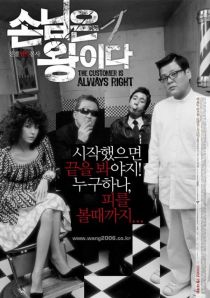 ynopsis: An adaptation of a short story by Japanese mystery writer Kyotaro Nishimura, The Customer is Always Right is a comic thriller about a timid barber confronted by a stranger demanding blackmail money. At each visit by the blackmailer, the barber is required to double the ante. The attentions bestowed by the stranger on the barber’s wife are another cause for alarm. Out of his wits and driven to despair, the barber hires a private eye in hopes of uncovering the truth about the blackmailer.

Review:
“Life’s but a fleeting shadow, a poor player, that struts and frets his hour upon the stage, and then is heard no more.”
–William Shakespeare, Macbeth

Perhaps no unlikelier spot on earth (or in South Korea, at any rate) could be found for the enactment of this ingratiating morality play than the Maestro Barber Shop, a storefront as reassuringly quaint as a picture postcard, where time stands still, and where life follows its well-worn groove like a needle on a phonograph record. From the obsessively organized interior of the shop, its polished and gleaming surfaces as seemingly unchanging as the pudgy proprietor’s gravity-defying bouffant hairdo, to the soothing sound of Mozart’s symphonies that fill his salon, everything seems to radiate calm. That is, until the appearance of a certain Yang-gil (played to absolute perfection by veteran actor Myung), a bearded, wizened old man with a crooked smile, dark sunglasses, a fondness for Anglicisms and tattooed fingers à la Robert Mitchum’s malevolent preacher in Night of the Hunter. By turns cruel and tender, Myung’s Yang-gil is a tour de force. By contrast, Ahn Chang-jin (Sung), the frustrated but devoted barber, doesn’t seem a match for his ruthless ‘client’.

If the former is too much the patient, cuckolded husband, his wife Yeon, a perky life insurance saleswoman (‘life planner’) is played with a smidgen too much reserve for a supposedly unabashedly flirtatious businesswoman. Rounding out the cast are the fine contributions of Lee Sun-kyun as the smarmy detective Jang-gil, and Park Cheol-min’s delightful cameo as the intrusive neighborhood party store owner, making one regret the absence of meatier parts for the principals, the barber and his wife.

In the final analysis, the film is a wee bit too reverential for its own good. When we discover the ‘shocking truth’ about the blackmailer, it is less astonishing than quaint. The final third of the film is rather anti-climactic, with real-life actor Myung’s filmography tossed inexplicably into the scenario, without in any way contributing to advancing the plot. Just the same, very assured direction from first time director Oh, from whom we look forward to greater accomplishments.

The DVD manages to convincingly reproduce gorgeously shot B&W footage alternated with monochromatic color, and exteriors tinged in shades of bluish-green similar to that of the fluorescent-lit shop, with only one reservation: for a film released only a few months ago in theaters, there are quite a few dust specks and dirt on the image. Spelling and grammatical errors abound, which, while annoying, do not in any way hinder understanding.  For a small drama where most of the action takes place in a tiny barbershop, the lively soundtrack makes ample use of bass, making my Polk subwoofer fire happily away.