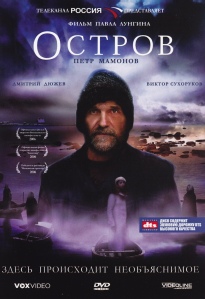 The year is 1942 and the Germans commandeer a tugboat carrying coal in the dead of night. Taking cover on a barge, Anatoly and his captain are soon discovered and orders are given to execute them both on the spot. Pleading for his life, the frightened young sailor will be spared if he takes that of the captain. Flash forward to 1976, and the young sailor is now Father Anatoly (Petr Mamonov), a monk living in a monastery situated on a remote island not far from where the pivotal event of his life took place, 34 years earlier. Time has not been kind to the repentant sinner, who passes his days gathering coal to heat his tiny cell, when he is not wandering the coastline atoning for his sins, playing pranks on Father Job, or giving counsel to the townspeople who approach him for consolation.

Dealing with issues of faith, guilt and the struggle with sin, “The Island” is hardly the kind of movie an unrpentant reprobate like me would find diverting, you are probably thinking. And you’d be right – had it not been for the excellent writing, outstanding performances, exquisite photography and touches of humor, the picture might have turned out to be unendurable indeed. Miles away from being a tiresome cautionary tale as dull as the overcast sky that hangs like a malediction over the remote isle of the title, the film is poignant, fascinating and droll — at times I was even doubled up with laughter at the unexpected turns of events. “The Island” closed the Venice International Film Festival, screened at the Toronto International Film Festival and was shown in New York as part of Russian cinema week. Nevertheless, in spite of the director’s avowed intention to make films for the ‘broad masses’ (the picture was a sensational success in Russia), the film has not been a resounding festival favorite in the West, where critics have said the picture might have limited appeal to aging art-house crowds.

Throughout his career, émigré director Pavel Lungin (who has made France his home since 1990) has been concerned with exploring the temperament of the Russian people. Taking the director’s chair late in life, Lungin began making his own films at the age of 40, receiving the award for Best Director at the Cannes Film Festival in 1990 for “Taxi Blues”. Lungin (or Lounguine in French) had already visited the theme of the contemporary saint, first with a non-conformist jazz musician in “Taxi-Blues” (1990) and again in “Tycoon” (2003), based on the true life story of Russian billionaire Boris Berezovsky. Lungin furthered his exploration of the less savory aspects of the Russian character in the miniseries “File About Dead Souls”, about a government inspector who investigates the sale of “dead souls” for an election campaign. The story, based on Nikolai Gogol’s novel of the same name, was co-written by Iurii Arabov, a frequent collaborator of Aleksander Sokurov. Viewers may be surprised to learn that the dark humor and irony of “The Island”, so reminiscent of some of Russia’s best nineteenth century writers, was in fact the graduation project of scriptwriter Dmitri Sobolev, a young student at the Moscow Institute of Filmmaking.

Without a doubt, one of the reasons for the film’s success is that we are spared the details of Anatoly’s conversion, making for a more compact and focused story. No better performer than Petr Mamonov chould have been chosen to portray the idiosyncratic monk. A former rock musician and star of Lungin’s “Taxi Blues” (1990), Mamonov had himself undergone a spiritual awakening 16 years ago. He has since starred in numerous films, often playing eccentric characters, a role at which he excels. Unkempt, with a coal-smudged face and chronic cough, living and sleeping in the boiler room of his tiny cell, Father Anatoly cuts a singularly strange figure. During the course of the film, Anatoly is approached by three women in need of counsel. The first asks for his blessing to get an abortion. The second asks him to pray for the repose of her husband, whom she believes dead. Anatoly replies that the man is indeed alive and living in France, though on his death bed, and that she must hurry to his side to comfort him during his last hours. In one of the more comical moments of the film, the woman, sobbing, replies that she can’t go – after all, France is a capitalist country! Yet another woman comes to Anatoly with her ailing son. In each case, Anatoly rather harshly insists the women abandon their earthly possessions and devote themselves to worship.

Anatoly’s dealings with the clergy are no less bizarre. Father Job (Dmitrii Diuzhev), jealous of the favor shown Anatoly by the Father Superior (Viktor Sukhorukov), spares no effort to undermine his authority. When confronted by the Father Superior about his outlandish behavior, Anatoly is forever evasive, quoting scripture. At first filled with envy, then with genuine curiosity and concern, Father Job nevertheless becomes gradually attached to the reclusive monk who shows up late for service, dresses oddly and whistles through his nose. Whether sorcerer, charlatan or saint, there can be no denying that without Anatoly, life on the isolated island would certainly be uneventful.

Contributing to the film’s impact, the stark, almost monochromatic photography of Andrei Zhegalov magnificently captures the tone and texture of the story, interspersing shots of the bluish frozen wastes, algae, waves lapping the beach and the weathered wooden planks of dock with the warm interiors of Anatoly’s quarters and the church. Less flashy than either “The Sword Bearer” or “9th Company” (Russia’s submission for the Oscars), “The Island” is a bittersweet tale of redemption full of touching humor and insight. The film’s cast is all first-rate, and Mamonov is surrounded by a group of talented actors that includes Viktor Sukhorukov and Dmitrii Diuzhev, (best known for playing gangsters in Aleksei Balabanov’s wildly popular “Brother” (Brat, 1997) and “Brother 2″ (Brat 2, 2000), Iurii Kuznetsov, and Nina Usatova.

Unlike the present situation in China, which has produced lavish spectacles of little dramatic interest, Russia’s renascent film industry has resulted in a quantity of distinctive and varied films of exceptionally high quality, whose strengths include excellent performances, outstanding cinematography and strong, unforgettable characters. “The Island” is further proof of this vitality. The DVD is housed in an elegant digipak graced by the bearded monk’s benevolent gaze. The 16:9 anamorphically enhanced transfer is acceptable, faithfully rendering the contrast and predominantly pale colors of the picture. The sound, while lacking strong directionality, is clear and solid, though bass is wanting.