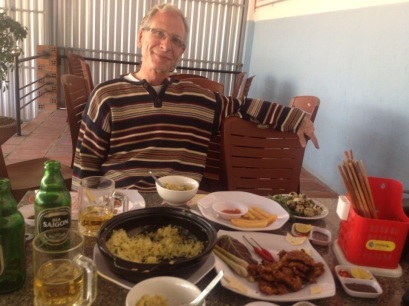 Phuong, a 21 year-old accounting major studying in Saigon, invited me to spend the Tet holiday in her hometown in Dak Lak province. Located in the Central Highlands, the region is noted for its coffee plantations and a sizable population of ethnic minorities. To get there, you have to catch a bus at Mien Dong station. The sprawling terminal, the busiest in Saigon, services the Eastern and Northern provinces. The sleeper buses are aren’t exactly spacious and the constant honking of the bus horn makes it all but impossible to get any sleep even if you could extend your legs. The adaptability of the Vietnamese is world-renowned: office workers pass their lunch break asleep on tile floors; xe oms (motorcycle taxi drivers) doze on their bikes in the scorching heat of the sun; and construction workers make their bed on the pavement. And ten or twelve-hour journeys in cramped quarters on vehicles with sagging suspensions don’t seem to bother this hardy race, who are fond of repeating the mantra that the buses are cheap. If I hadn’t forgotten to bring my passport, I would have booked a flight for the return trip home. Anyhow, the bus took off at 7pm and we arrived safely in Buon Ma Thuot at around 3:30 in the morning.

One incident that I’d rather forget that took place during the trip was when the bus paused at a rest area and my brand new Macbook Pro Retina dropped five feet to the bus floor below just as I was about to descend from my berth. Only moments before, passengers were sleeping there and 2.2 kilograms of metal crashing down could have seriously injured someone. Fortunately, nobody was resting there now, as most of the occupants had disembarked. Meanwhile, Phuong was already outside, smiling and waving at me to get some air and use the toilets. My face must have been ashen, as she looked bewildered. It remained to be seen whether the laptop’s display had cracked. Horrified, I slowly unzipped the case, inspected the housing and pressed the power button. Incredibly, the machine survived the ordeal unscathed! Both Buffalo Extreme hard drives also seemed to have escaped unharmed. The only thing that came between owning a $2,300 hunk of twisted metal and shattered glass or not were the 2-inch thick cushions lining the floor of the bus and a pretty nifty Crumpler laptop bag I’d purchased here for under $25.00.

If you’d only seen picture postcards of Buon Ma Thuot’s city square, with its gleaming white sculpture and azure skies, you might be forgiven for thinking of the capital city as clean and modern. In fact, it is a wretched town with filthy restaurants and odious food, second-hand appliance stores and not much else. Apparently, all the attractions – by which I mean the elephants, a waterfall and god only knows what else – are located on the outskirts some 50km from the city center. All this to say it’s wholly unsurprising that during the five days I spent in Dak Lak, I didn’t spot a single tourist. More than once, I asked myself whether Phuong was playing a cruel trick on me. By the same token, wasting away in the ghost town of Saigon during the holiday like I’d done last year wasn’t the most thrilling prospect either. The sole virtues of Dak Lak are a mild climate and the inhabitants, hospitable to a fault.

On day three of my adventure, I accompanied Phuong and her sister to see the famous elephants but somewhat predictably, there were none to be found. To be honest, I wasn’t all that disappointed; it’s not like I haven’t seen elephants in captivity before. On the other hand, there was some splendid tropical vegetation to be seen crossing the bamboo foot bridge that leads to the park. Bordering the park is a reservoir fed by a hydroelectric power station with prominent signs posted everywhere warning persons not to trespass. Which didn’t prevent unattended children from playing in the stream; I even saw one intrepid soul bathing and shampooing his hair.

A coworker of Phuong’s sister, a trucker, called and said he’d join us for dinner. An hour later, he showed up with two huge bowls of chicken and a case of beer. While we were eating, an unexpected guest in the form of a baby praying mantis paid us a visit, which, judging from her expression, fascinated Phuong more than a parade of prancing pachyderms ever could. It was also an opportunity to get some candid shots of her, since she usually objects to me filming her. It was already late in the evening, and the young man gave us a lift to the bus stop in town.

We arrived in Phuong’s hometown of Eakar (or 52, so-called for the distance to BMT) and I booked a room for $9.00 a night. Two days later, a close friend of Phuong had me over for dinner with her family. Her father sells wood used for furniture and must be fairly well-off, as he has been able to send his children to college: but their home bears an uncanny resemblance to the cabins built by the first settlers in America, and today seen only in historical museums. Fittingly, we had a rather rustic meal of tough chicken, duck, sticky rice and copious quantities of beer. I haven’t had what you’d call normal digestion since moving to Vietnam and matters didn’t take a turn for the better in Dak Lak. Without meaning to sound ungracious, it wouldn’t surprise me in the least if a steady diet like this weren’t one of the leading causes of domestic violence in rural areas in Vietnam.

The following day, before heading back for Saigon, we stopped at a roadside stand for some corn on the cob just as the sun was setting – the golden hour for shooting video. Afterward, they dropped me off at the station, where I waited around for an hour. A short tanned man with a mustache pulled up on a Honda Shadow, took out a pack of imported cigarettes and offered me one. It turns out that he was the proprietor. His eldest daughter, speaking perfect English, then proceeded to introduce me to all the members of the family. Being the only foreigner in a small town in Vietnam at times borders on the surreal. The bus departed at 7:30pm. To be safe, this time I slept in a lower bunk.