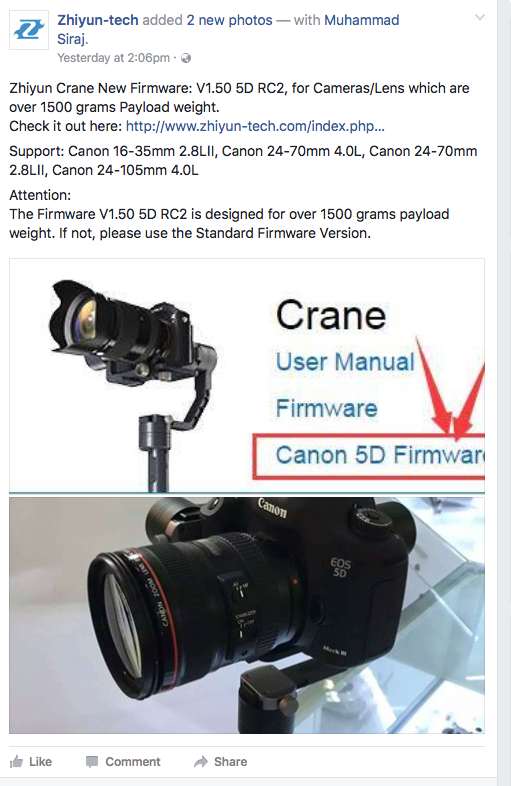 Zhiyun announced yesterday a new firmware upgrade allowing Canon 5D owners the ability to use their popular Crane brushless gimbal stabilizer. Formerly, Zhiyun rated the payload of their pistol grip stabilizer at 1,200 grams, which many in the forums over at EOSHD thought was an overly conservative estimate. The new firmware, v1.50 5D RC2, will enable camera/lens combinations of over 1500 grams payload weight. Zhiyun is now saying over at their Facebook page that the upgrade allows the gimbal to carry as much as 1,800 grams, a remarkable 50% increase over their initial claims. Although Zhiyun recommends using the standard firmware upgrade if not exceeding 1,200 grams, they maintain that with the upgrade, the gimbal’s minimum payload remains unchanged at 350 grams. I downloaded the new firmware this evening, but haven’t had a chance to test it out yet. I am obviously eager to fly a couple of my Sigma Art lenses with the Metabones XL speed booster. The Zhiyun Crane currently sells for as little as $586.00 USD over at AliExpress.

Edit: The problem is, I was hoping to test the recent Sigma 30mm f/1.4 DCDN for MFT on the stabilizer and put up a review of the Crane over the weekend, but now, I’ve got to test a whole bunch of other lenses. Which means, I won’t be able to do reviews of the iFootage Shark S1 slider and Wild Bull T7 tripod as soon as I’d have liked.